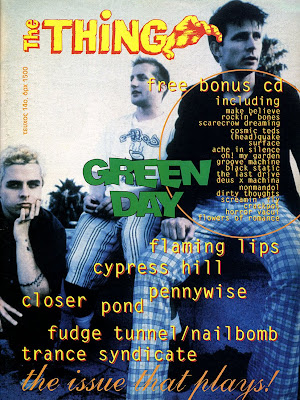 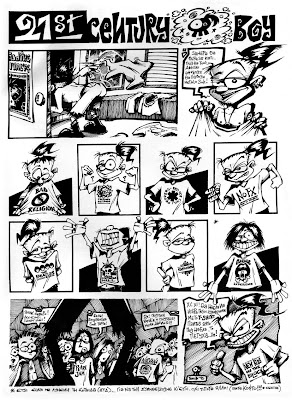 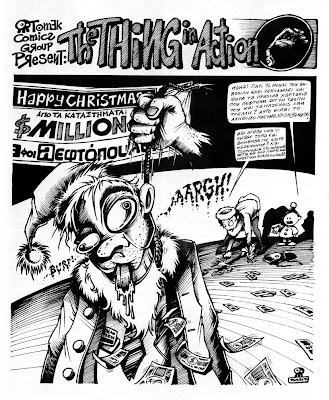 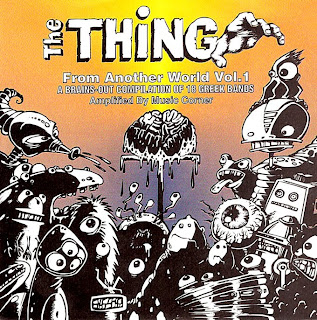 The fourth episode came in issue #14 of "The Thing" in 1995. In this story I played a game with the T-shirts which I collected like a maniac in those times. We had also another story (Christmas this time) for "The Thing in Action".
But the big thing in this issue was the release of the first CD "The Thing from another World Vol.1" which contained a collection of the best Greek alternative bands like The Last Drive,  Rockin' Bones, Make Believe, Deus X Machina, Oh! My Garden and my friends Surface and Ache In Silence. More information can be found here and in the amazing site about Greek fanzines Fanzinesnet!
Jimbo of course, didn't wait to ask me to do the cover for this collection and I made these 18 creatures from another world, one for each band.
All look at the slimy ... brain!

The VERY CLOSED CIRCLE - New Blog on the Block! 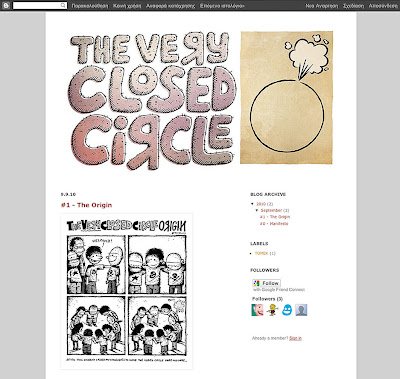 There is no need to say too much about this blog, only one thing:
To join this VERY CLOSED CIRCLE is very very difficult. Only in your dreams, I think.
But to enjoy it, is ridiculously easy.
Just CHECK & FOLLOW!!!

Email ThisBlogThis!Share to TwitterShare to FacebookShare to Pinterest
LABELS The VERY CLOSED CIRCLE 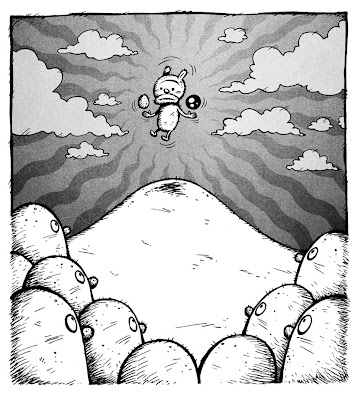 This is a sample frame of my new six-page story called "Soap Opera" which will be published very soon. I will not say more details for now, but stay tuned here and the Tasmar's "Krakblog". Something will happen out there ...

POSTED by TOMEK No comments:

Email ThisBlogThis!Share to TwitterShare to FacebookShare to Pinterest
LABELS COMICS

ZINIOL #9 - A tribute to the Greek comics

A pleasant surprise comes from Poland!
In October it released the 9th issue of the alternative comics magazine ZINIOL which is dedicated to the Greek comics. Involving several comic artists such as: Tasos Maragos, Tasos Zafeiriadis, John Bardakos, Alexia Othoneou, Spyros Derveniotis, Michael Dialynas, George Melissaropoulos, Petros Xristoulias, Manos Lakgouverdos, Ilias Kyriazis and possibly others.
I will participate with my stories "ΦATSA" and "The Most Stupid Hits In My Life (World) Ever" in which ZINIOL had reference in the third promo for the issue and this is my first appearance in the Polish magazine ever. At last I will see my work printed in the country I was born. Cool!
Unfortunately ZINIOL released only in Polish language, but worth a look and get a taste of the remarkable Polish comics scene.
I would like to say a big THANKS! to ZINIOL and Bartek Kuczyński, who is responsible for this move. 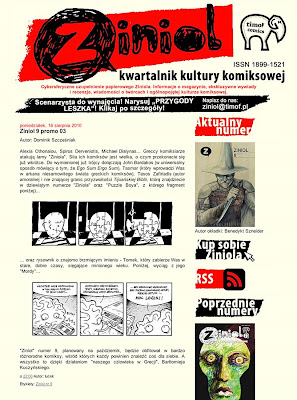